UNTIL 16 MARCH THE HOUSE OF MANTEGNA HOSTS THE EXHIBITION 13X18: FOTOGRAFI(A) MANTOVA. AMONG THE WORKS, THE SERIES PROMISES BY CLARA TURCHI, AN ARTIST FROM MANTUA AND A GRADUATE IN FINANCE FROM UNIVERSIT&AGRAVE BOCCONI

Born in 1978, Clara earned her second degree in Photography from the London College of Communication. After eight years in London and a one year stay in New York, today she lives in Utrecht to attend a Master in Fine Arts at HKU. After many years working in the banking sector, the jump to the artistic career was instantaneous and without any hesitation: “It was the morning of 15 September 2008”, Clara recalls, “when I decided I would leave finance forever for art”. It was just few hours before Lehman Brothers filed for bankruptcy and Damien Hirst broke all auctions records collecting 111 million pounds at Sotheby’s.
From J.M.W. Turner to Joseph Cornell, from John Stezaker to David Hockney and Piero Manzoni, many are the artists who have influenced Clara’s career. “The series ‘Promises’”, she explains, “represents the expression of the contemporary need to understand the world of finance, which for many of us is so obscure and hard to interpret”. That’s why in her works the details of the banknotes are enormously enlarged: “Each of these pieces of paper hides a thousand symbols, messages and details. On the 100 Euros banknotes, for instance”, she explains, “on a door’s column there’s the statue which looks like a satyr scratching his belly: what could be the meaning of this drawing?”.
On the assumption that pictures and banknotes are unexpectedly linked by their symbolic value, Clara states: “on one hand, the banknote is the promise to pay the bearer a sum of equal value; on the other hand the photograph is the promise that what was photographed had really existed. Today, with the establishment of the digital techniques, we all know that not all the photographs have a correspondence in the real world, and the same happens with money: nevertheless, we still accept money and pictures for their nominal value, believing in the promises they bring with them”.
Clara participated into many group exhibitions and some important personal exhibitions held in London and New York. In 2010 one of her works was selected among 11 thousand applications to be displayed at the Royal Academy’s Annual Summer Exhibition. Among Clara’s plans for the future there’s a new moving to London, where her partner lives, and a PhD. “In the meantime”, Clara assures, “I will keep looking for new ways and opportunities to dialogue with the public through my works”.

The alumni of the Bocconi School of Law are a talented and diverse bunch: an alumna became magistrate at the age of 25, another deals with competition law in Brussels, an alumnus has specialized in labor law and ended up at ILO. Not to mention the alumna expanding her law firm thanks to Brexit, the arbitrator working in New York, or the professor at a Japanese university who also translates manga comics

She led the University for twentyfive years, between 1932 and 1957, promoting the introduction of advancements such as foreign exchanges and scholarships for graduates. Donna Javotte Bocconi tells her story in this imaginary interview 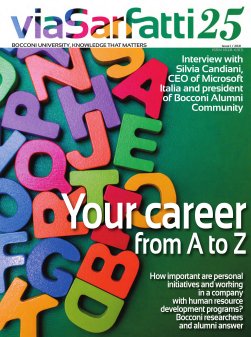