Technologies: Blockchain among the Elective Courses for BSc Students

THE DEVELOPMENT OF A BUSINESS IDEA BASED ON BLOCKCHAIN IS ONE OF THE ACTIVITIES OF THE NEW COURSE DIRECTED BY FRANCESCO GROSSETTI, WHICH FOLLOWS THE INTRODUCTION OF MANDATORY COURSES IN CODING

After coding, with mandatory Python courses, it’s the turn of Blockchain to enter Bocconi classrooms, with an optional third year undergraduate course in English (Introduction to Blockchain), which started with this academic year. «This is not a technological course», explains Francesco Grossetti, the professor of the Department of Accounting who is in charge of it, «but an introduction, made with accessible language, which on the one hand wants to make it clear that blockchain does not only mean cryptocurrency and, on the other, wants to take some hype off the topic. Also because, once eliminated the exaggerations, what remains still has a disruptive potential. Blockchain is not only used to exchange currencies, but, in principle, any digital good. The mechanism of exchange works on a distributed network in which algorithms of distributed consent verify the consistency and the truthfulness of the very transactions».

The course started with 90 students, testifying to a growing interest in new technologies by Bocconi students (one of the other courses held by Grossetti and directed by his colleague Gabriel Pundrich, Big data for business decisions, has passed this year from 70 to more than 180 students) and sees among its prerequisites the Python course, «because to understand Blockchain you must know how to read a code», says Grossetti. After the fundamentals in technology and software, the course will move on to Smart Contracts, cryptography and distributed consent, and onto a small glance at how to program Blockchain.

For some of the topics covered, the theoretical introduction will be followed by testimonies from external experts, both academic and non-academic. In addition, students will be asked to develop a blockchain-based business idea that will be discussed in the classroom in the form of a pitch. 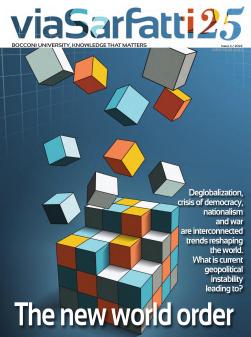