Elisa, from Via Sarfatti to Campi Elasi

A MULTIFACETED MUSICIAN, THE CLEACC ALUMNA RELEASED HER FIRST EP: HOW TO BE PROACTIVE? I LEARNED IT AT BOCCONI


The name she chose, Elasi, does not have pretenses of a genre and origin, a bit like her music, which mixes influences and sounds from all over the world. But Elisa Massara, 26, is anything but an artist with an indefinite character. With a preparation that includes a degree from CLEACC (Economics and Management for Arts, Culture and Communication) in 2015 and seven years of study at the Conservatory, the young lady from the town of Alessandria  is starting to carve out her place.  This Ep just out, "Campi Elasi", marks her personal space in a music market that is not at all easy. And in this, university experience gave her a hand.

"When I enrolled at Bocconi I didn't think of becoming an artist," she says. “I've never had a big ego, I've always thought of putting my ideas at the service of others, not promoting them for me. Then at CLEACC, where I found a very lively, creative and stimulating environment (we still collaborate with some of my colleagues and help each other today), I acquired a very proactive mindset. What Bocconi left me was just that: the ability to activate and organize from scratch, perhaps with few resources". 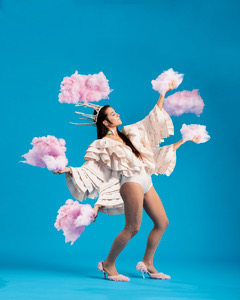 So it was that Elisa, who has always listened to music at home thanks to the passion of her parents, and studied first piano then classical guitar at the Conservatory and at fourteen performed with a pop-punk band called Amnesya, decided that music must truly become her profession. “I was on exchange in Maastricht, an excellent environment for creatives, and there I decided that this had to be my path”. She requested and was permitted to write a thesis on "Self-entrepreneurship of an emerging artist" ("I had a very open-minded thesis supervisor") and wrote it while working in a music production studio for cinema in Los Angeles. After the discussion of the thesis, she returned to Italy, where she obtained a scholarship in the Pier Paolo Pasolini Art Workshop in Rome to study song writing and deepen her knowledge of the music market. That is also the period in which she participated in and won several calls for emerging artists, such as Ora! X. “Without Bocconi preparation, I probably wouldn't have had the courage to open the call envelope,” she says.

Later, the signing for the Sugar record company, which heard her on the stage of the Miami Festival and decided to put her on contract. For them she is a composer and mixes different musical genres, drawing from different worlds and cultures. And while waiting to make a record, she also has another idea in her head, also suggested by his university experience and by the lessons of Andrea Lissoni's course: "I would like to mix different forms of expression, such as music and figurative art. I'm already preparing a show, but with Covid around it's not easy ".

Oh yeah, Covid. What does an artist learn from forced distancing? “Actually, already in unsuspecting times, in 2019, I had realized a project of remote musical collaborations. The idea is to work and play with artists (not just musicians) from different places around the world. It is a good experiment and we will produce a few things ". However, even for Elasi, distance is still a limit when it comes to making music: “I don't believe much in streaming concerts, for example. In the end it is me alone in my room watching an artist on a screen. A concert should be experienced with company ".

Resources, organizational processes capable of anticipating crises and procedures to respond to them. These are the three factors that determine the resilience of a company and make it possible not only to overcome the crisis but, in some cases, also attain posttraumatic growth

The Impact of Economic Shocks on Our Minds

A study negatively correlates mental wellbeing with the effects of globalization and in particular the exposure of one's sector of employment to international competition. A looming threat to our mental health that places a burden on the national health system and is fast worsening with the Covid19 crisis

Despite the Lockdown, the Private Aviation Market Is Taking Off

Support in the emergency, but also new anti Covid services: thus SEA Prime, of which the alumna Bocconi Chiara Dorigotti is CEO, has not stopped taking its wheels off the ground