Enria, a European born in Bocconi

ANDREA ENRIA, PRESIDENT OF THE ECB SUPERVISORY BOARD, RECEIVED THE 2020 BOCCONI ALUMNUS OF THE YEAR AWARD. MARIO DRAGHI'S HOMAGE DURING THE CEREMONY

In receiving the prize, Enria recalled how Bocconi impacted on his European spirit. “Bocconi University was also where I first came into contact with the subject of European integration which has played such a great part in my working life. This was the time when the Single European Act came into being, following the Intergovernmental Conference under the Italian Presidency of the EU, which established the creation of the single market by 1992 as an essential objective for ensuring the economic and political progress of the European Community. As regards economics, the debate in Italy was centred around Bocconi University, with Mario Monti and Franco Bruni specifically playing a key role,” recalled Enria.

A graduate in political economy in 1987, Enria joined the Bank of Italy in 1988 and, at the foundation of the ECB in 1999, he moved to Frankfurt. In 2004, he moved to London as Secretary General of the Committee of European Banking Supervisors. Then, in 2008, he returned to the Bank of Italy where he headed the Supervisory Regulations and Policies Department, until he became the first Chair of the newly formed EBA (European Banking Authority) in 2011. In 2018 the ECB nominated him President of the Supervisory Board.

“The lessons learnt during those years in Bocconi were extremely valuable in terms of my subsequent professional experience, when my economics training had to be steered towards complex regulatory issues and put to use in making comprehensive changes to institutional arrangements, with banking regulatory and supervisory responsibilities being gradually shifted towards the European level,” said Enria.

When Art and Fashion Meet

From sponsorship of exhibitions to more extreme forms of hybridization, such as the creation of limited editions of products, the encounter between the two separate worlds brings benefits and recognition to both

When affiliation works (and when it doesn't)

Being recognized and associated with a highlevel incumbent is a positive sign for those entering a sector because it certifies its basic quality. However, this is not the case, for example, for new bands that plays as support acts at the live events of established artists. A study explains why 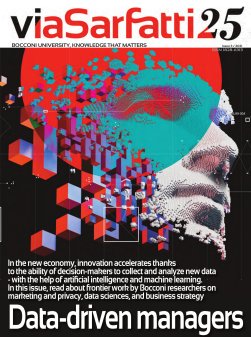