The FTxBocconi Talent Challenge Tests the Skills of Transnational Students

FINANCIAL INNOVATION WAS AT THE HEART OF THE TWO BUSINESS IDEAS THAT ENDED UP ON TOP OF THE CHALLENGE ORGANIZED BY UNIVERSITY BOCCONI AND THE FINANCIAL TIMES IN LONDON, WITH 100 STUDENTS FROM ALL OVER THE WORLD COMPETING ON BUSINESS TRANSFORMATION AND INNOVATION

On the roof of Bracken House, the London HQ of the Financial Times, the European flag is not going to be lowered anytime soon. It was there that during the first three days of Brexit
a selection of 100 students from 40 countries of the world starred in the FTxBocconi Challenge, where they developed solutions and new business models to take into account the digital revolution in fashion, fintech, artificial intelligence, and sustainability.

"The goal of the initiative, which brings together Bocconi and the Financial Times," Rector Gianmario Verona explains, "is to stimulate and attract new talent to develop solutions consistent with the kind of accelerating technological and social change we have been experiencing over the past few years. Digital has an impact on both content and process. In this context of digital disruption, Bocconi aims to respond to market challenges by training students who have the sensitivity and ability to contribute to change by using the innovative tools (AI, Big Data Analytics, etc.) being developed in the IT sector. The talent we are looking for is the kind represented by the 100 protagonists of FtxBocconi, who are ultimately people that have the ambition to learn through a combination of analytical ability and transversal knowledge of problems."

This was the approach adopted by the three teams winning the challenge, something which was acknowledged and rewarded by jurors. In fact, jurors considered that the best ideas were the ones developed for fintech and fashion.

Finfit, the team that won the challenge, intends to create an app which, through gamification, educates and nudges young people to accumulate savings for retirement. InveZ Generation, the runner up, wants to provide training and online services through an AI algorithm that assists young people in choosing their investments as they earn their first salaries. Artificial intelligence is also behind the business idea winning the third prize, Matchbox, which aims to study consumers’ tastes by processing of large amounts of data, and then sell them a surprise pack containing an outfit designed to perfectly match their tastes.

Leonie Von Loeper, a German student part of the FinFit winner team, defines the challenge as "An illuminating experience where I met a lot of people. In my team I worked with students coming from Colombia, Brazil, the United States, and the United Kingdom. The first day, they gave us a lot of content to be used, which we employed in the following days to flesh out the idea, and understand how innovation really works. I ended up accumulating a lot of knowledge.”

"It has been three days spent at a frantic pace," says Daniel Otero, a 21-year-old Spanish student who belongs to the second-placed team. "Having to develop an idea in basically 24 hours forced us to think quickly, and it was a great experience in team-working. It was incredibly interesting to meet diverse people from so many countries, from Japan to Brazil, and beyond."

In the first two days of the talent challenge Bocconi faculty and alumni, including Nobel Prize winner Michael Spence and Vittorio Colao, who currently sits on the Unilever Board and was formerly CEO of Vodafone, offered their points of view, and so did Financial Times editors. Starting the afternoon of the second day, students were divided into 20 groups and had to work out their solutions to the challenges they were handed.

"I joined because I feel European and because the challenges discussed here are among the main challenges of our times," says Jean Sagna, a 23-year-old German. “Bocconi and FT are two top institutions which have a lot to teach others about digital transformation. The panelists were of the highest level, and what they said was something novel.”

"I came here to better understand how technologies can help international cooperation, and the public sector in particular, be more sustainable," says Karishma Arora, a 26-year-old Indian woman. "It was also a great opportunity to meet with girls and guys from all over the world and top speakers."

Members of the eight finalist teams will have the opportunity to develop their idea by participating in the 2020 Call of Bocconi for Innovation (B4i), the University’s accelerator of startups, the same treatment reserved to alumni. But the real prize was above all the experience, something which the thunderous final applause underscored. It was not only for the winners, but for all the students who participated.


The components of the three winning teams: 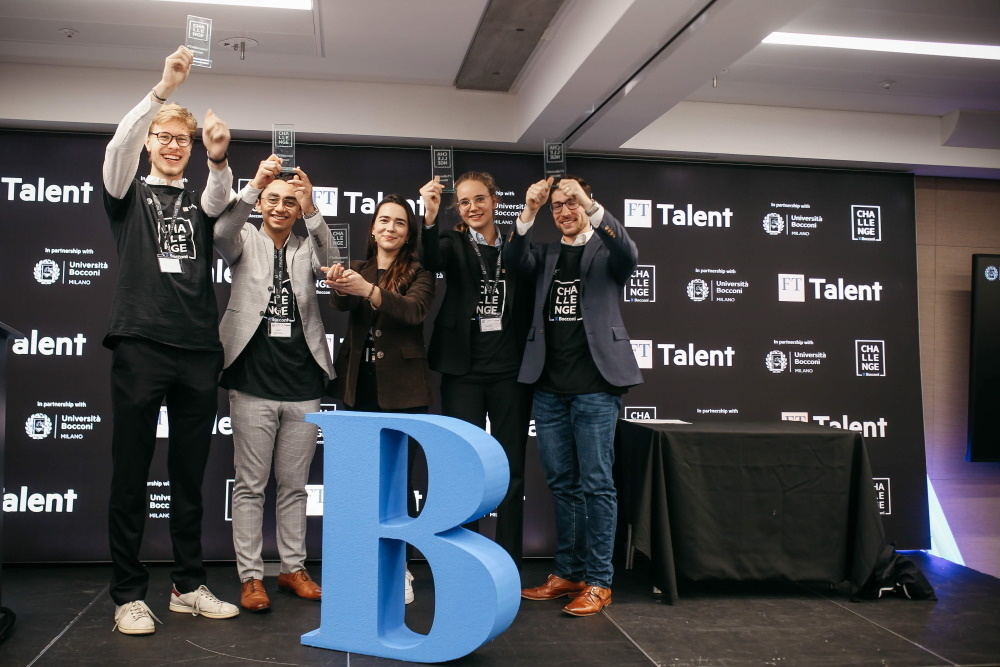 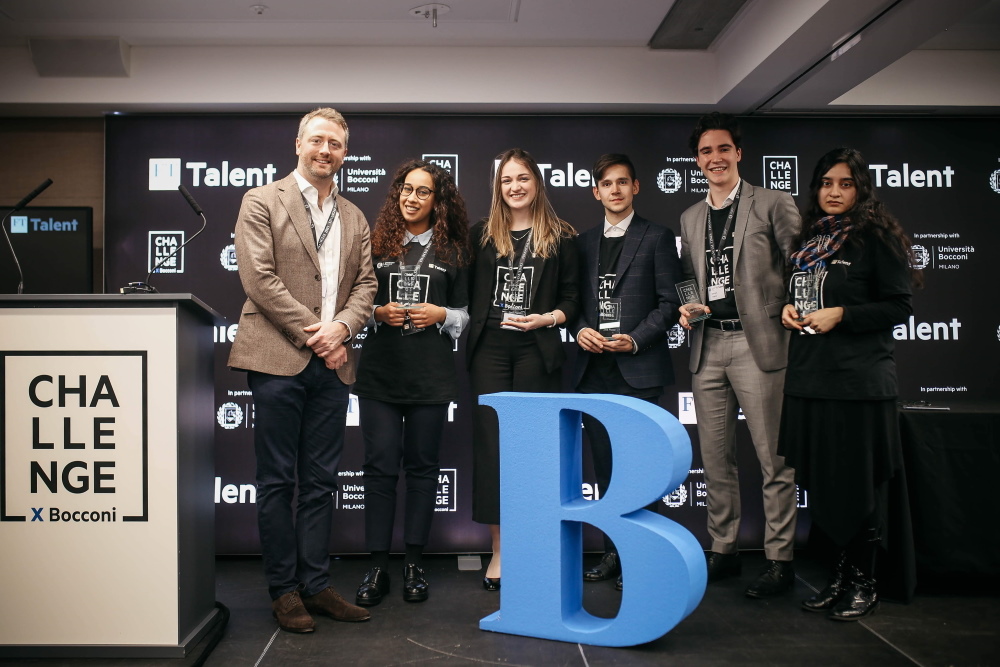 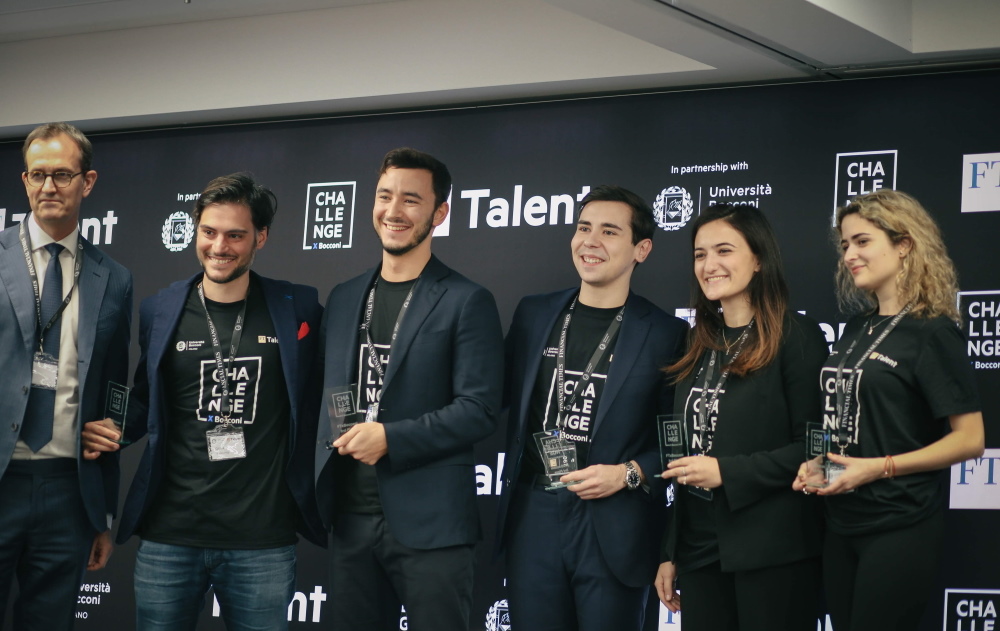 Resources, organizational processes capable of anticipating crises and procedures to respond to them. These are the three factors that determine the resilience of a company and make it possible not only to overcome the crisis but, in some cases, also attain posttraumatic growth

The Impact of Economic Shocks on Our Minds

A study negatively correlates mental wellbeing with the effects of globalization and in particular the exposure of one's sector of employment to international competition. A looming threat to our mental health that places a burden on the national health system and is fast worsening with the Covid19 crisis

Despite the Lockdown, the Private Aviation Market Is Taking Off

Support in the emergency, but also new anti Covid services: thus SEA Prime, of which the alumna Bocconi Chiara Dorigotti is CEO, has not stopped taking its wheels off the ground