SDA Bocconi on the Financial Times's Podium of Podiums

THE SCHOOL MOVES UP TO THIRD PLACE IN THE RANKING OF THE BEST BUSINESS SCHOOLS IN EUROPE, WHICH TAKES INTO ACCOUNT THE RESULTS OF THE FOUR RANKINGS PUBLISHED DURING 2019

From Master programs to courses for executives, thanks to the positive results obtained in the various rankings of the Financial Times in 2019, SDA Bocconi School of Management has climbed three positions to place 3rd in the ranking of the best European business schools.
In 2019, SDA Bocconi School of Management organized courses of different levels and durations for over 12,000 Italian and international executives.

The Financial Times ranking is based in equal parts on the overall scores that each school has achieved in the four rankings that the newspaper draws up during the year – for Masters in Management, MBAs (Master of Business Administration), EMBAs (Executive MBA) and executive education, both custom and open programs. SDA Bocconi's rise in the ranking has been consolidated in recent years, reaching the podium for the first time and climbing above well-known institutions such as France’s INSEAD, the Swiss IMD and Oxford Saïd, University of Oxford’s business school.

«This result in the Financial Times ranking acknowledges the completeness of the teaching offered by Bocconi and SDA Bocconi,» comments Rector Gianmario Verona.

«SDA Bocconi has taken the concept of continuing education very seriously,» adds SDA Bocconi Dean Giuseppe Soda, «proposing education experiences for each stage of career development and focusing its offer on the strengthening of skills in a logic of continuous learning. And, while adopting the best international standards, SDA Bocconi's Italian touch is the personalization of its training courses for companies and individuals.»

SDA Bocconi's growth will be further boosted by the new campus, inaugurated on November 25. «The campus was not built simply as a physical set of classrooms, but as a space to enhance the educational experience thanks to infrastructural and technological elements that are absolutely avant-garde,» concludes Soda. «The new classrooms, in fact, allow lectures to be broadcast in broadband, and devices to be shared both during lectures and study, including multiple onscreen projections, to make the experience immersive and interactive.»

The Financial Times ranking follows a series of positive results in the most important international rankings. At the end of October, SDA Bocconi was on the European podium of the Economist with its MBA, which earned 3rd place, while in November, Bocconi was 6th in Europe in the ranking dedicated to Economics&Business in the US News ranking based on research excellence. 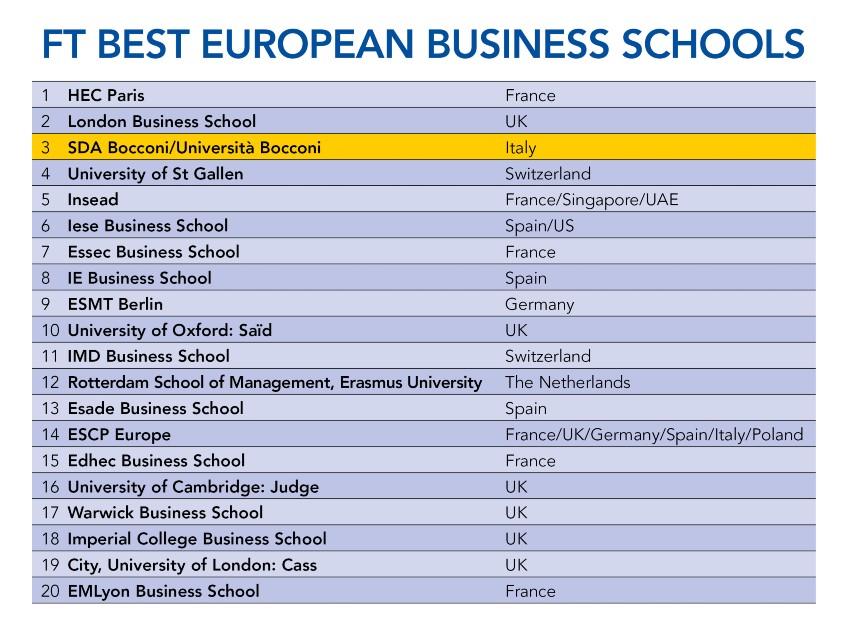 Negotiating with People? It's a Matter of Reading Their Emotions

Born from historic failure, the study of negotiation looks at personalities of actors to formulate bargaining strategies

by Cesare Cavallini and Miles Gietzmann

What if Italian companies did like the Americans? Cavallini and Gietzmann analyze how and under what conditions to introduce Chapter 11 of United States bankruptcy statute into Italian law

Anna and the Heroes of the Arena

With a Master in Management in Arts, Culture, Media and Entertainment, Anna Zo worked in the organization of Heroes, the concert in streaming and live that brought together the best of Italian music at the Verona Arena

After a bachelor's at Bocconi, Martina Bo, 23, is now in the 2nd year of a double degree program in European Affairs and International Policy and Politics run by Bocconi and Sciences Po, two members of CIVICA â The European University of Social Sciences. Her international outlook and enthusiasm for the European ideals made her a natural student ambassador for the CIVICA alliance. In this interview, Martina talks about her role, her experience as a truly European student and the benefits of cooperation across the continent